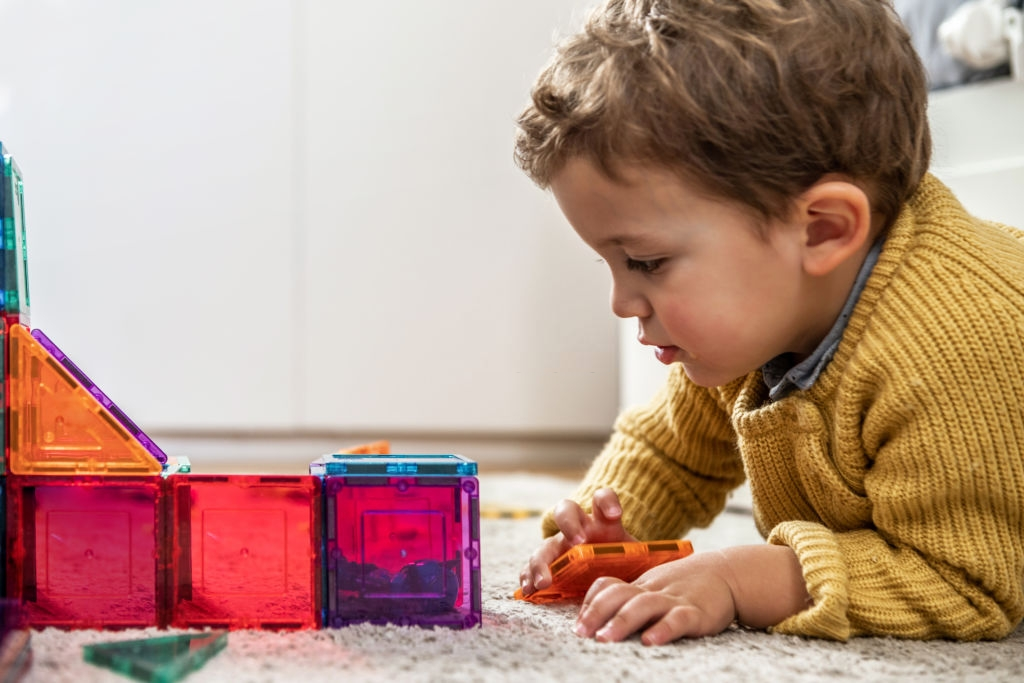 Every child is unique in an intrinsic manner. Their individuality also caters to their strengths, talents, & skillset. Although, it’s absolutely normal that they learn & grow at their own pace. Swiss Psychologist Jean Piaget believes that children take an active part in the learning process. You can think of them as scientists who perform experiments. They learn about the environment by making constant observations.

Jean Piaget’s theory of cognitive development centers the focus on understanding a child’s nature of intelligence. Instead of only focusing on how children acquire knowledge, the learnings of the theory suggest how children adapt to new information. During everyday errands, children come in contact with new insights. They build upon existing knowledge. It is naturally done by conforming to past experiences to blend in with the new ones.

We at Tickle Right are here to make sure that your child’s cognitive development involves learning based on actions. These actions & experiences will make your child think quicker & differently.

How Jean Piaget Developed The Theory?

Jean Piaget is a Switzerland born psychologist of the 1800s. During his employment tenure in the 1920s, he was curious to understand a child’s psychological approach to logical thinking. This theory was inspired by an encounter with his own daughter & nephew. He wanted to perceive why children give incorrect answers to questions that require them to think logically. This led him to believe that a child’s mind differs in versions from an adult’s mind.

It’s naturally perceived that a child’s mind is a minor adaptation of an adult’s mind. However, Piaget’s understanding was the first ever to put light on that a child thinks differently from the way an adult does. The scope of acquiring intelligence skills develops in various stages over time. An older child is not just quick with logical thinking as a young child. Instead, there’s a difference in their thinking patterns. Adults are not more intelligent than children. It’s just about how children think differently than them.

Piaget’s theory talks in detail about a child’s cognitive development process & potential. It’s based on the actions & experiences in their early stages of life. It is then that a child builds upon the past knowledge with the present one to progress mentally.

The 4 Stages Of Cognitive Development

As per Piaget, a child’s intelligence develops over a series of stages. The route to mind-blowing cognitive development goes through a universal approach. Irrespective of the culture, your child will go through the same process. Only the pace may vary for them. Given below are the same 4 stages of a child’s cognitive development. 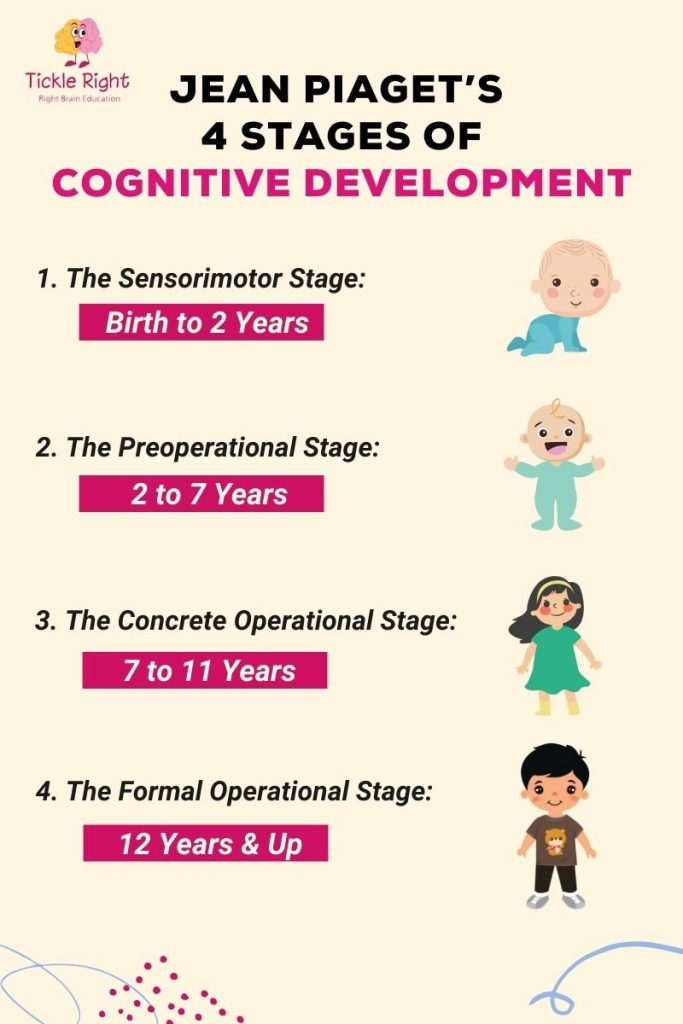 1. The Sensorimotor Stage: Birth to 2 Years

The sensorimotor stage includes the development of a child right from birth to 2 years of age. The following are the prime characteristics & the developmental changes in this stage:

In this stage, a child learns about the world through sensory activities & movements. The main focus of this stage is to develop an understanding of object permanence. This suggests that an object exists, even if your baby can’t see it. This stage is more about experiences in early childhood. They may discover something new every second moment. Their basic senses & reflexes help them connect with the surrounding environment. The cognitive development in this stage also helps develop physical actions & language cues. During the end stage, they begin to representational thoughts.

2. The Preoperational Stage: 2 to 7 Years

The preoperational stage entails the cognitive development of children ages 2 to 7 years. The following are the prime characteristics & the developmental changes in this stage:

In this stage, a child’s memory & imagination skills are strengthened. The previous stage can be considered a foundation stage for language development. Although, the preoperational stage sparks the emergence of language skills wholly. They learn a lot from pretend plays. Yet, they often struggle with developing empathy, and logical skills, or understanding others’ points of view. Things are still very much concrete for them. The attribute of being egocentric & intuitive at this stage is another factor. It restricts a child from not thinking beyond their point of view. However, they’ve acquired the ability to represent the world internally.

3. The Concrete Operational Stage: 7 to 11 Years

The concrete operational stage focuses on a child’s cognitive development from ages 7 to 11 years. The following are the prime characteristics & the developmental changes in this stage:

In this stage, the child becomes less egocentric. They begin to understand the perspective of other people around them. This also leads to the development of unique thoughts & feelings. The child understands that their thoughts & opinions are different from the rest. Such development is supremely marked by logical thinking & methodical manipulation. As it brings major changes in a child’s cognitive development process. They begin to figure things out in their head. This is also known as operational thinking. This helps develop a problem-solving approach for real-life roles. However, they may still struggle with hypothetical problems.

Piaget’s formal operational stages involve children from the ages of 12 years & older. The following are the prime characteristics & the developmental changes in this stage:

This is the final stage of Piaget’s cognitive development stages. It is characterized by deductive reasoning & understanding of abstract concepts. They develop the potential to think about alternative solutions to a problem. Even beyond it helps them develop scientific reasoning, abstract theories & solutions. It’s more like having the right critical thinking skills to deal with hypothetical situations systematically. 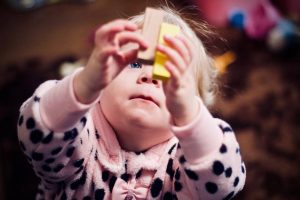 Jean Piaget was a Switzerland born psychologist in the late 1800s. He was the first to put a systematic study on child development. He is one of the most iconic figures in the field of developmental psychology in the 20th century. Piaget’s theory of cognitive development suggested how children think differently than others. Their knowledge is built upon interactions, ideas, & experiences.

The following are the main points of Jean Piaget’s theory of cognitive development:

The following are the three main theories for cognitive development:

You must know that your child is unique, talented, & different from other kids. The cognitive development process journey for your child begins right after birth. And for it to happen successfully, you must expose them to the right learning environment. We at Tickle Right, tap on a child’s undiscovered potential. Our right-brain training program helps nurture kids from a wholesome perspective. It intrinsically helps develop a love for learning & skill-building.